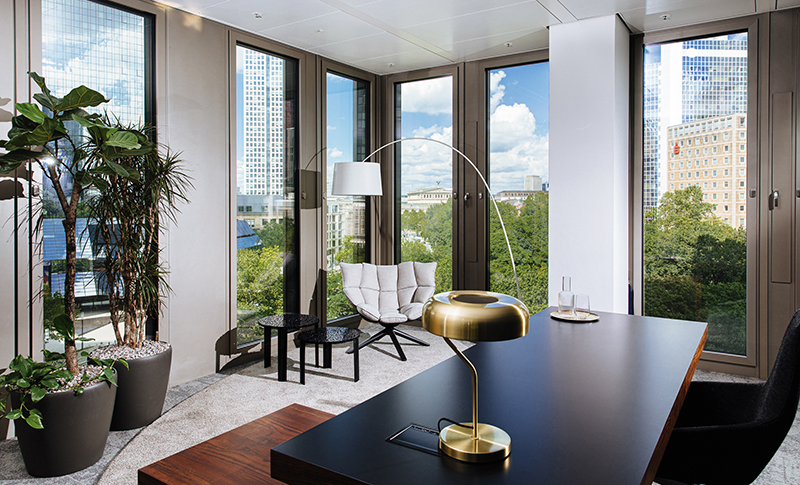 Leinfelden-Echterdingen – Ensuring that opening elements in a fixed mullion and deadbolt facade fulfil specific functions can become a major challenge, depending on the facade design. The Roto Object Business specialises in assisting window and facade manufacturers on their path to achieving a functionally safe and visually appealing complete solution. The Roto product range for aluminium opening elements is continuously growing on the basis of intense dialogue with architects, specialist planning engineers, system suppliers and facade manufacturers.

The globally active Roto Object Business builds the bridge between facade planners, modern metal and facade construction companies and the hardware developers of the Roto Aluvision division. At the same time, it ensures that any outstanding issues are addressed as quickly as possible. Requirements for the ideal hardware solution are examined and then a tailored configuration or new design is created. Architects benefit from the consultants’ wealth of experience, the short response times of the Roto organisation and binding statements on the feasibility and implementation of a design.

The Roto Object Business offers various services, such as fast sample creation for standard and special components by means of a 3D printing process, right up to installation of the opening elements. In the Roto ITC, the company’s own, certified test centre in Leinfelden known as the “International Technology Centre”, window and hardware tests are performed for project solutions in compliance with national and international standards. Many of the components that were originally newly created for a specific project are incorporated into the Roto standard range in just a short space of time, including some innovative hardware solutions for ventilation flaps in fixed mullion and deadbolt facades.

“In particular, the demand for hardware for ventilation flaps is growing dynamically,” explains Matthias Nagat, Head of Aluvision Range Marketing and Product Adaptation. These would generally be manufactured with sash widths of 170 mm to a maximum of 300 mm. The installation space in which the hardware has to be placed, which is generally from the “AL”, “AL Designo” and “PS Aintree” product groups and often has complex functions and many components, is therefore very limited. At the same time, the often requested concealed hardware (“AL Designo”) needs more installation space in the rebate than surface-mounted hardware. Nevertheless, Roto has since developed numerous sophisticated solutions.

For instance, it was possible to limit the travel and opening angle of special hinge sides based on “Roto AL Designo” in such a way that the ventilation flap virtually includes an integrated opening restrictor. A separate assembly for opening restriction with very short opening restrictor rods was also specially developed for a project.

For tightly sealed ventilation flaps, Roto recommends using special corner drives which allow active locking points to be set on the hinge side. As the producer explains, this would make it possible to produce RC 2-compatible elements, even in confined spaces in the rebate of narrow sashes, while counteracting sash warpage, which can become a problem with ventilation flaps.

As Nagat goes on to explain, Roto offers a wide range of products for outward opening windows in fixed mullion and deadbolt facades too. For instance, the “FS Kempton” range of friction stays includes stainless-steel scissor stays for windows in many formats. Thanks to particularly careful grading, the range covers the entire spectrum of sash widths and heights in which Top-Hung and Side-Hung windows are typically produced without any gaps.

Using “Roto PS Aintree” parallel projecting scissor stays makes it possible to ensure an all-round opening for outward opening windows. This achieves outstanding natural ventilation. At the same time, the parallel projecting scissor stays make the window sash noticeably more comfortable to use, as it can be opened outwards in a controlled manner and closed again using a gentle pushing or pulling movement.

The corrosion resistance of all Roto scissor stays corresponds to class 5 in accordance with DIN EN 13126-6. They are made from rounded-off, austenitic stainless steel 1.4301 (AISI 304) of the kind used in medical instruments.